Alex Hijmans was born in Heemskert in Holland In 1975. He moved to Galway In 1995 and began a career in journalism in Ireland. Alex worked for Foinse, Raidió na Gaeltachta, RTÉ and Nuacht TG4 for ten years. He has translated a novel for teenagers, Maistín (2001), from Dutch to Irish and his play Aingilín was performed in Dublin and Galway in 2002. Short stories by Alex have been published in the magazines Comhar, Crannóg agus Dúillí Éireann.

In 2007 Alex headed for South America, where he spent six months living in a poor suburb – or favela – on the outskirts of Salvador, the third largest city in Brazil. This provided the material for his novel Favela (2009) which was shortlisted for Gradam Uí Shúilleabháin 2010 (Irish Language Book of the Year Award). He has published two other novels, Aiséirí (2011) and Tearmann (2016). 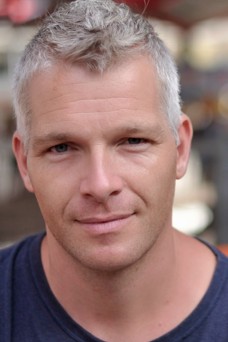